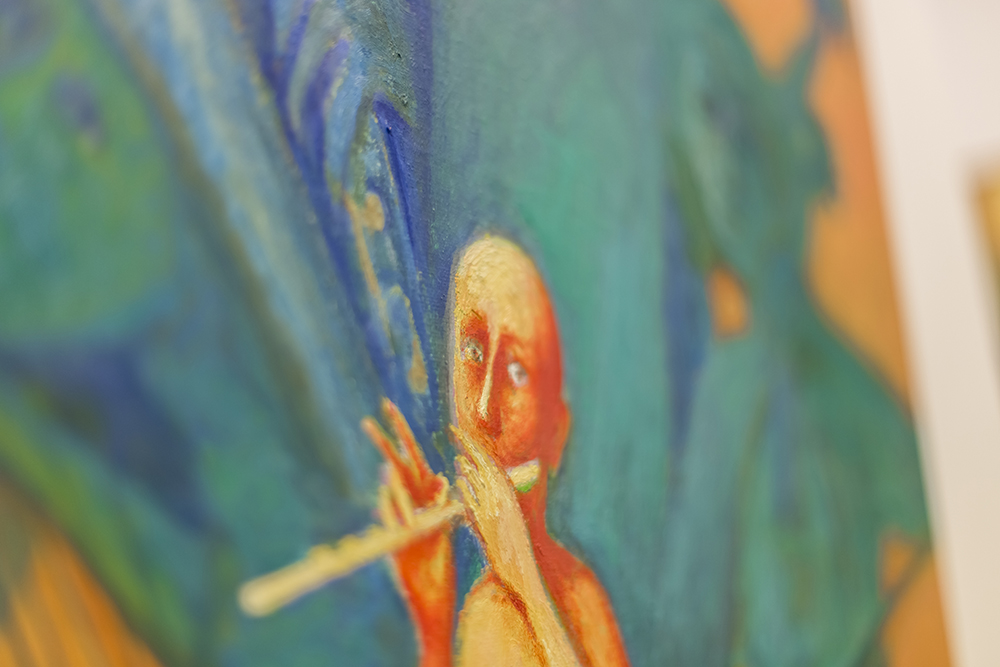 A BRIDGE OVER THE RIVER STYX. Ekaterina Volkova

A bridge over the river Styx is the goal and meaning of art. The artist proclaims this postulate not only in words but also quite specifically on his canvas Chare Thursday from his Theatre polyptych. A bridge over the river Styx is a way to overcome non-existence and the gap between reality and oblivion. This bridge over which immortal souls pass is like their passage through the consciousness of the artist. Charon is the sorrowful ferryman, the grave-digger, while the artist is the creator of a bridge across time. He is himself that bridge. This poetic declaration or metaphor is all-encompassing like a myth. It is on the order of Dante.

Not many artists have managed to evade such temptations as the allure of “fashions”, extreme ideas, experimentation and oversimplification. By not rejecting any of the established avenues from the history of art and also internalising them and reformulating them, Tokarev is unlike any other great artist. His creative scope invites a dialogue with the viewer and a poetic contemplation of the world in all its manifestations alongside vanity and greatness, tragedy and comedy.

He was born into a family of exceptional artists for whom art was more than a religion, and he tried his hand at most art forms—poetry, literature, theatre, cinematography, and music. He strove to seize immensity, and he arrived at the familiar language of painting that was his by birth.

The jazz approach and symphonic scale

Music is the favourite theme in his oeuvre. His 1974 canvas Farewell Orchestra was his first programme work. The MAN-ORCHESTRA theme was one of his happiest discoveries of the 1980’s. It conveyed a universal formula to Tokarev and allowed him to find freedom of colour and form. It has the close intermingling of the symbolic and the abstract, of the required and the spontaneous, that is inherent in music more than any other of the arts. The virtuoso improvisation that is MAN-ORCHESTRA has spread across 400 canvases and has finally turned into a creative strategy and an alter ego, an endless lyrical self-portrait, a voyage deep inside himself and a self-enquiry.

The artist said about The Big Orchestra (1990, 200×400 cm, in the artist’s collection), “I wanted to paint a symphony, a symphony of life and death where there is birth and love and tragedy, a cosmic symphony with an emotional impact close to the Day of Judgment or the Apocalypse in icons. A Russian icon is remarkably musical, exalted and celebratory.” In an icon every detail is symbolic. The divine nature, its unearthliness and inconceivability, are traditionally symbolized as circular, either aureoles or ovals (the mandorlas). In The Big Orchestra Tokarev reaches the “the Cosmic” and “the music of the Spheres” through the field that takes shape from the silhouettes of musicians and their instruments and abstractions of sounds, “the music they are playing is only a pretext for the rendering of the Cosmos”. The Descending Holy Spirit, which is represented in icons as a dove, for Tokarev is the ascent into eternity of human genius, a symbol of hope that transfigures the earthly realm.

It should come as no surprise that the same sense of well-ordered movement in the world and its music arises in another series of pictures, Window to Zamoskvorechye. This endless procession of “realistic” landscapes painted from a window of the artist’s studio transforms bits of Zamoskvorechye into musical chamber works that are elegant meditations reminiscent of Hokusai or Monet.

Tokarev is one of a handful of artists who work with large forms in the visual arts. His multi-part works—polyptychs—consist of five or more pieces. In them the artist, as if in his own theatre, is playwright, director and actor. In this “theatre of life” there is a harmonious blend of the divine and human comedies, epic sagas and theatre of the absurd, reality and myth. The upshot is a synthesis, a layering of symbols, melodies, rhythms, volumes and forms. These painted “narratives” spread out before us like a hypertext combining semantic layers of varying depth.

“It may be that a polytych has no boundaries,” the artist explains, “as the multiplication of its parts, emotional and conceptual, takes hold the final number increases many times. And you, like a crazed gambler in a casino, bet all your chips on red. Your winnings are immaterial. The risk is increased, but the sensation is so captivating and the possibilities become so encompassing that it is impossible to stop. Put everything you’ve got on the Generator of Meanings.”

Once more the allusions to icons are unmistakable. In addition to the celebratory tone that is similar to that of icons, Tokarev’s polyptychs are analogous to the tiers[1]of a Russian iconostasis. One of the most important of these is the “Holiday Tier”.[2] The polyptych Holidays tells of the personal celebrations in the artist’s life—love, night, birth and music—and it is about the whole of life illuminated by the “sparklers” of creativity.

The epic character of the narratives contained in the polyptychs is indicated by their titles—Mythologies, Parables, Hypostases, The Twelve Scriptures—and by the way they address the contemporary spirit of mankind.

The polyptych Theatre is an investigation of the nature of creativity and of the meaning of the artist’s existence in the world. For the leading metaphor a superficial reading would say that all life is theatre, and people in masks lose track of the boundary between reality and fiction. The artist is the principal character in this theatre, the ballet master guiding the Muses as their sovereign king (as in the Engagement panel). In the next canvas the engagement ring, the symbol of temporary power, becomes a wheel, a sign of the temporal, a miller’s grindstone that spins out a tragi-comic theme. And the artist himself is picking his way through the grotesque theatre of life among characters that shaped his consciousness and recollections from childhood. At that point he laughs at himself as he is oppressed by this Muse-model who brazenly sits upon him (Triumph of the Muse). In the fourth panel (Chare Thursday[3]) the artist becomes a bridge over the Styx, and across it pass various figures both real and imagined. In Comedian, the last canvas, he uses the historical image of the minstrel-puppeteer, which turns into a tree with many hands that are also branches. He is the owner and creator of the threatre; he is the Artist.

Tokarev does not tolerate art that is either political or politicised. His metaphors, images and graphic choices are about creating, love, childhood, and of course about the meaning of existence. He does not reject the readily comprehensible Greek and Christian myths, but he rethinks them, tries them on in his own era, and plays with them. Then their speech and meaning become sharper, and they change so that time loses its grip on them. His mythology can never be banal.

“The idea for Zamoskvorechye Mysteries came to me in Pompei,” Tokarev says about his recent canvas (2009), “not actually while I was at the Villa of the Mysteries—it was closed at the time—it might even be that the picture grew out of that letdown. In the end it doesn’t really matter what cause or accident provoked the idea. But if it the idea does come, it is beyond any insomnia. Reality and fantasy are tangled together in the same knot. What do we really see in that outlandish fire twirling? The metaphor of life that rushes by in the Author’s theatre, whose childhood storms through as a naked boy in a silly winter hat while the muses of life and death lure him into a round dance tugging him each in her own direction. And there the artist is with his globe head at the top of a fountain looking down on everything with an uncanny gaze. Life after all is fire twirling.

Tryptych The Metronome of Childhood

The Drummer: Rhythm like a heartbeat determines the movements of boys and girls, of ships and paper boats that are embarking on their voyage which is Life.

The Golden Planet: Above a girl with a metronome in her hands hovers the enchanting music of childhood which is like a flying saucer, a wonderful shining apparition that dazzles and dominates; it is the sweetest and most penetrating music there is.

By the beat of the drum, by the click of the metronome, by the skip of a heartbeat.

In Russian iconography death is also a celebration. If life is a celebration, then so is death. There is an old joke from Odessa that goes like this: A funeral procession is making its way through the city. The departed is seated in the hearse. An acquaintance passes by and asks—

“Semyon Abramovich, is it you they are going to bury?”

“But, Semyon Abramovich, you are absolutely alive!”

“Ah! Who cares about that!”

From this joke is derived the central panel of the triptych. However, instead of a hearse there is a zinc-plated basin, the kind housewives use for laundry and to wash children. And in it, as in a boat, we bob along through life, and then they pour us out with the sudsy, dirty water. This is a sort of parable that comes out of the joke.

The last two canvases are the beginning of a new series, Metaphors of God.

Juncture is a tragic metaphor for coition or for love of life and death. It is worth mentioning here Pasternak’s “crossed arms, crossed legs, crossed fate” –an ambivalent love story.

Slow Dance shows the dance of life. The dancing nude figures, glorious and ridiculous, are like prisoners in line for the gas chamber. This is life’s slow dance, its farewell dance…

Let’s go across this amazing bridge that Tokarev the artist has built so that we will ponder some and chuckle a bit and shed a tear. He is the bridge. Please tread carefully!

[1] Tiers are horizontal rows of icons. A series of several bands of tiers forms the ancient Russian iconostasis that separates the altar area of the church from the main part.

[2] The Holiday Tier incorporates icons with images from the stories of the evangelists and reflects the annual cycle of Christian holidays.

[3] Chare (also called Passion or Clean) Thursday is a special day in the Christian calendar that marks the beginning of preparations for Easter. In the Russian Orthodox tradition Chare Thursday is a point of inflection from which it is possible to project the activities for the coming year, and a great many ceremonies and rituals take place on this day. One of these is to bring home from church a lit candle, which is a symbol of divine grace.