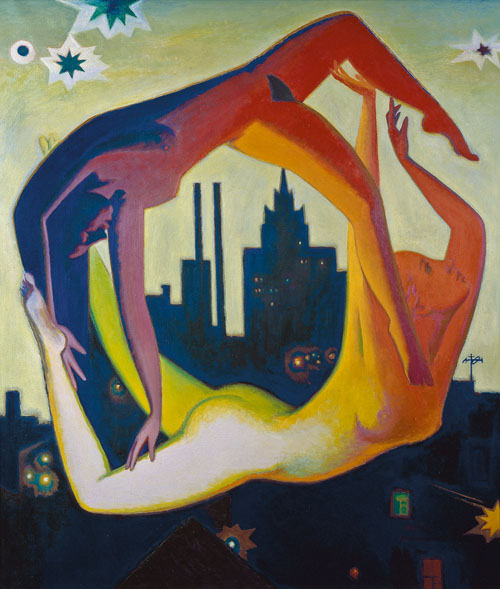 Confessions of a Sleepwalker

I am mortally afraid of heights. The fear comes from my childhood. My parents went to their friends’ dacha. A sunny summer day. A long-long journey by tram.

They were relaxing in the cool shade of a walnut tree. Some boy and I were playing nearby. Then they all started shouting it was time for a swim. “Let’s go to the beach!” They didn’t even register that the sky had turned nasty and was smothering the world with a blanket of lead. The sea was seriously stormy. It was roaring and smashing below and we were to climb down to it. In a habitual motion my father swept me up to his shoulders and began his descent along a narrow path. He was somewhat stormy himself.

Her screams were muffled by the sound of the sea. I was scared and my dad was having a good time. He couldn’t hear mom’s voice and kept shouting:

It was as if my head was pushing against the sky and the clouds were gliding against my shoulders.

Finally mom managed to snatch the kid, and my “viewpoint” descended. Meanwhile, my father and Fedka began wrestling with each other and rolling down the slope. The grass, the skimpy bushes—nothing would stop them.

Then they swam. Two heads bobbing over one mound of water, and then disappearing behind the next one, which was just as blackish yellow and inescapable.

My mother’s panic scream. I’ve been fighting my fear all my life.

In the stories told in whispers before bedtime sleepwalkers take to the edge of the roof in the middle of the night with their eyes shut. People of the Moon. They could fall down if suddenly awakened.

The great Japanese painter Hokusai was nicknamed “Bewitched By the Moon”. So, he was a sleepwalker.

It is nighttime. The city falls asleep in a stupor. Windows go dark. The phone is silent. Trams are stowed away in their depots like toys. The silhouette of the city resembles a mountain with mysterious caves, chests full of gold and treasures. My eyelids go heavy and fall. I swoon. But this is not sleep. I can never give a clear account of this state. A swarming of thoughts and concentration at the same time. That’s when I go hunting, strolling, rummaging around like a cat seeking a love tryst. To the roof with its endless expanse that excites you, fills you to the brim—your lungs, nostrils, ears. I drink it in like an alcoholic. I quietly walk the ledge, the resonant blade, the edge of reality and nonexistence. Freedom swells up like a bubble. What wondrous ploys are up its sleeve! What ideas arise from its caves! Emeralds, garnets, sapphires! It is quite usual that when I wake up “in the morning”, around two in the afternoon, what I’ll find will be faded jewels and a fantasy carriage turned into a pumpkin. My weary doubts.

My grandma used to tell me how as a baby I fell from my bed in the middle of the night and broke grandpa’s spittoon. Those white earthenware spittoons used to be a must in every flat. The spittoon was shattered to pieces, while I didn’t get as much as a bump on my head. “Strong head!” laughed grandma. That’s probably how it all began.

Full moon. The curse of neurotics, cardiac and hypertensive patients. The full moon over Zamoskvorechye is my time, my chance. I’m served visions on a shiny silver platter. And then there is neither remembrance nor limitation. The roof, the attics, the hatchway into my studio; my canvas is my hatchway. Don’t call after me, guys. I’m busy. Don’t wake the sleepwalker!

What does Time look like? It cannot be felt with your fingertips. The clock is not a representation of time. Banknotes or a credit card are not representations of wealth. But maybe Time is two naked lesbians, Night and Day? Tied up in the circle of their concerns, tormented by the longing for a caress and a touch, driven to each other by the desire to copulate which cannot be satisfied. In the middle of the circle is a phallic symbol of a Stalin high-rise. It makes the center of the triptych. On the left is the Midday: a red and gold watermelon cut open swarming with white figurines. The bloody juice of hell. And the watermelon’s flesh—the Apocalypse which Russian icons always interpret as a party. And at that party, we naked sinners queue up to climb the stairs and perform our sole merry flight, not clear where to or what for. We are granted the joy of flying before we depart.

On the right is the Full Moon. The magic and mystery of a predestined road. The moonlight’s pathway impressed on the darkness of the sea. Both the flight and the fall of consciousness, the dance of visionary flights around the pathetic beach umbrella.

Mysterious and inexplicable things are happening to me. I’m afraid of reality and fear daytime. It is not the bright light or clearly drawn silhouettes that frighten me. It is the fear of aggression from our kin. By day they swarm the immense city, they stampede with their glass eyes bulging, crushing everything in their way. They are in a hurry. I’m afraid of the crowd, of people rushing by. They are in a hurry to make money, to spend it, to love, to crap, and to make the likes of themselves. I do not like them. It could be that I envy them and am waiting for them to fall asleep.

The telescope in the window sees that everyone is asleep. The half-meter-long keyhole snatches from the forbidden door of the night a window with a girl getting undressed. She is studying herself in the mirror. Beautiful beyond reach and unsuspecting. Natural. She is talking to the mirror which she trusts. She is touching herself not looking for pleasure but rather checking the degree of her own irresistibility. The luminous naked fantails in aquarium windows.

A voyeur. That’s what an artist is.

That’s it! Lights out! I get itchy and nervous in anticipation of plunging. I open the attic trapdoor. My attic is full of whispers. It squeaks, grunts and wails. Pigeons used to live there and the noises were different then. They grunted at each other year round like roommates in a shared flat; they argued, copulated, mourned, and chatted. They would doze off and suddenly give out a shout, wake up, try to take off and hit their wings against the old iron roof. Then the dormer was blocked up and the pigeons disappeared; they even stopped flying into my studio like some drunken neighbour entering the wrong door by mistake.

I put on my scarf lest I catch a cold and approach the easel. It is perched on the roof, on top of the weird contraption left there since the war when an anti-aircraft gun was stationed there. An easel on a gun support.

Years after painting them I’m looking at my canvases. Did I paint them with my eyes closed? There is no border between reality and fabrication. The unconscious has turned conscious. It could be that what I’ve done can be understood only by sleepwalkers like myself. They are roaming other roofs at this moment and with half-shut eyelids studying the world in the mirror that they carefully bear inside themselves.

Crazy alpinists risk their lives climbing doubtful summits. They are aroused by numbers. The higher the altitude they’ve reached the better. Self-deception. Substitution. From those summits they see nothing but a dull featherbed of clouds or summits just like theirs. The summit is in you. In me. In each of us. That’s what one must climb.

One day I noticed that my roof was taking on a different form. It was inhabited by weathervanes looking like gymnasts, like dancing circus performers. They turned in the wind brandishing their little flags. They couldn’t care less about the direction of the wind. Their languishing eyes sometimes squinted in self-forgetfulness, sometimes stared in awe. They would turn and freeze in ecstasy. I was overcome by an urge to dance. With my feet I found the most protruding point of the half-broken roof railing and opened my arms in a sweeping motion. The wind was blowing into my pyjama wings and I started whirling slowly. A blissful mindlessness. Now I know what the lives of weathervanes consist of.

When I came to a stop I felt there was someone else on the roof. Not the weathervanes, no. The woman came very close and began unbuttoning my pyjamas. She untied my scarf and tossed it away. It flew kite-like over Zamoskvorechye. The cold air was climbing up my armpits.

– What are you doing? – I asked dim-wittedly, shivering.

– The place is not quite right.

She pressed me against the chimney, a broad old stone chimney that hadn’t known smoke for half a century, but was always warm. When we came to, I lifted my head up: a man was sitting on the chimney. Two legs, a multitude of arms, and about five heads reminiscent of ostrich eggs. His hands were holding musical instruments. His lips were blowing into trumpets, flutes, and saxophones. There was no sound, but the eyes were winking in understanding. I stroked her velvety peachy buttock. And then I recognized him! The Man-Orchestra! The silence was shattered. Music filled the night.

The dormer through which I come and go–I must have one just like it in me. And I don’t mean my ear. It is getting chilly and I crawl downstairs having given a tender stroke behind the ear to the rat named Shousha who is staring in amazement with her little red eyes.

– Shousha, shush… Let’s give them some peace!..

My roof is not the Winter Palace. Russian emperors knew a thing or two. Their somnambulism was regal. Muses are lined up along the Hermitage roof like guards on watch. You wouldn’t feel lonely there. The scale of that is beyond comparing to the iron platform where I loom by night covered in the cold sweat of fear like a monument to my own pyjamas. I’m mortally afraid of heights. But what choice have I got? Work is a disease. My confabulations make the weathervanes spin.