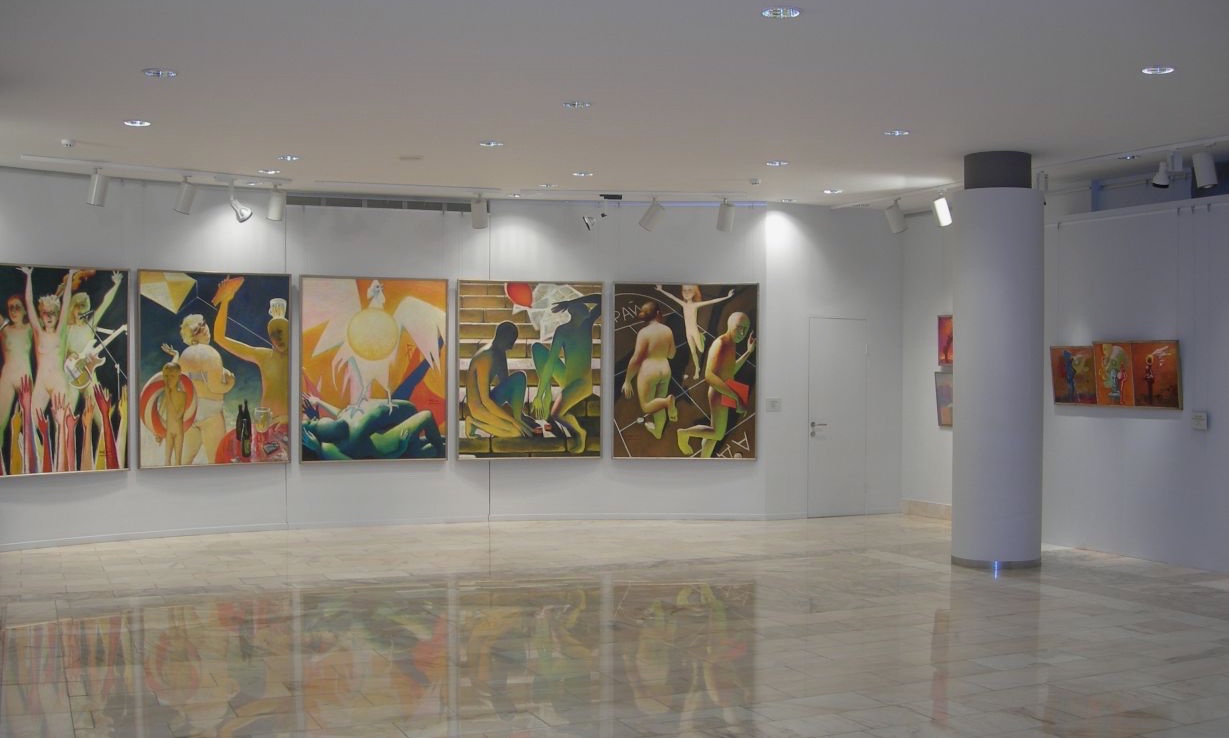 The multipart form—as in a series of paintings, frescos, tapestries, in other words, images (or novels, operas, musical compositions connected with each other by subject, form, or idea)—existed in one variety or another as long ago as Ancient Egypt, Greece, and Rome. The frescos of Pompeii. The medieval tapestries with a Fair Lady and a Unicorn at the Cluny Museum. The canonical Russian iconostasis with its orders, stories and meanings that used to be argued over almost to the point of a fistfight in the Ecumenical Councils. Botticelli’s story of Judith. Paolo Uccello’s The Battle of San Romano. Michelangelo’s frescos in St. Peter’s. Rubens’ story of Marie de’ Medici in the Louvre. There are also large-scale works in music. Literature and poetry also provide a wealth of examples: from the Mahabharata, the Ramayana, Firdousi’s Shahnameh, and Homer’s epic poems to Balzac’s Human Comedy and Proust’s Remembrance of Things Past. What is the urge? Why all the multi-volume works that are so difficult to make? They are attempts at a global generality that is all but impossible in miniatures. The poliptych is a multipart form where interactions and mutual influence allow greater possibilities than any single component has on its own.

The poliptych affords almost boundless opportunities. When the meanings and emotions from each part are multiplied together, the sum total is vastly increased. And you, like a crazed gambler in a casino, put all your chips on red. Your gain is not material. The risk is greater, but the sensation is so thrilling and your opportunities expand so broadly that there is no way you can stop. The prize is the Adding of Meanings.

The Muses are on friendly terms with each other. They hang out together. Different kinds and forms of art prompt different solutions. At one point montage and “Kuleshov effect” were breakthroughs in cinema and are still at the foundation of modern film and TV, but they had existed previously in poetry and literature. At the same time as cinema was exploring montage, Udaltsova was creating her poliptychs, which were also essentially a juxtaposition of parts. “Everything new in art is a thoroughly forgotten older one.” What Matisse and Picasso discovered for themselves so that they might realize their personal perceptions had in fact been uncovered by Japanese and Chinese artists and by Russian and Byzantine icon painters. Art is a closed circle that mankind wanders through.

I don’t conceive a poliptych or a triptych all at once, in one piece, as used to be the norm in the old Academy. An artist was expected to sketch all the parts and adjust their shapes, colours and other parameters. Then he would make actual-size sketches on cardboard where adjustments would continue, and then finally the painting would be done on canvas. That this academic way is not suitable for our times is clear from my own practical experience, from my father’s, and from the experience of artist friends who are drawn, as we are, to large-scale forms. A large canvas likes a “war” to take place on it, a lengthy bitter struggle that overwhelms the subject, the canvas, and even itself. There is the crystallization of the idea which is more important than anything else, the rejection of chaff and superfluous details, purification of language, the search for a certain sound and for what Chagall used to call “chemistry”, and what Pavel Florensky failed to explain merely saying that “it is when the God benevolently moves the hand of the artist.”

I usually start with a single canvas while merely suspecting (and sometimes not even suspecting) that others may be possible. The game is predetermined (as Huizinga might say) and so are its rules. You are at the centre of a magic circle. Then the virus is stirred up and the everlasting dissatisfaction with what has been done conspires with it and provokes you. They won’t let your idea rest in the hope of working it out. That is how other canvases come to be, one after another, and the idea globalizes. There is also a parallel process of checking the canvases against each other, inventorying, and auditing in an attempt to wriggle free from the “Spanish boot” of predetermination.

The first canvas in not necessarily going to be the central one in a poliptych, but for some reason it never ends up being on the far right, that is, at the conclusion. I probably couldn’t explain this quirk even to myself. Naturally, as separate parts are painted they need to be coordinated with each other. They begin a dialogue not just through their meanings, but also through graphic solutions, rhythm, and colour.

The degree of guessing and inquiry in the multipart form expands in proportion to the number of works in the poliptych. I always want to find out what it will come to, how it will end. I dream about it and those dreams are the sweetest. Dreams are free of the discontent which is inescapable in reality.

In the end the force of each of the parts, the completion of meaning within each of them taken independently, should then be combined like solo instruments so that they sound like a unified orchestra of soloists. There should be an interdependence of meanings, melodies, rhythms, dimensions, blotches, forms, and mathematical functions: an attempt at a complex musical structure which is subordinate to the freedom of higher mathematics and bound by it.

Plato said that “song birds compose melodies”. I wonder what laws govern them. Is it really nothing but inspiration?

Poliptychs are often broken up. It seems that no one is interested in the coherent text that they compose. And since each canvas in a poliptych is relatively independent, it faces the danger of being plucked out of context. In this fashion poliptychs by N. Goncharova, Bruegel’s Months, Paolo Uccello’s The Battle of San Romano, and Rublev’s iconostases are scattered around the world. Alas! A large form is difficult to perceive. It takes some effort to read. It is not like leafing through the comic strips, even though a comic strip is also a kind of a poliptych.

I do not invent any new forms of language. Those are a vestige of the 20th century, and I don’t see how they are necessary. The history of Esperanto shows that it was not needed. The visual arts are a universal language just like music. I dislike incapacity to think veiled by quasi-academic and convoluted language. Great writers always arrive at writing simply and coherently. What you are talking about is what really matters. When the desire and need to speak out are all of a piece, the form of language chosen is an aid that you are free to use according to your will and feeling. It comes about by itself. During the first half of your life you are tormented by doubts; you only guess rather than know who you are. You must struggle through guesses, passions, infatuations, and envy, through the great masters of the past and the successes of one’s contemporaries, through the admiration and awe you feel for your parents’ work. It is a thorny path to self-preservation.

I try to speak to the canvas in a language it understands and to hear its answer, because the canvas does not just answer and participate in a dialogue, at some stage it also begins to dictate the rules of the game. If you’ve succeeded in suppressing your pride and have surrendered, the love match produces a result. There is hope and fear at the start of every new canvas. Art, like religion, will not abide self-assertion. If you’ve come to God, be so good as to dissolve yourself in him rather than show your pride and twist his arm. Arguing with God is foolish. Deference is the highest form of love and pleasure.

Now back to curiosity. It is the universal driving force. A man sleepily looking at indeterminate spots and a pensive design on dirty wallpaper is a budding creator, a dreamer trying to see something in the gibberish. Associations come to him. They take him by the hand and lead him into the delightful slumber of consciousness. That’s how paintings are born.

Conceiving subjects is just a pretext and a slight opening of the door to the infinite opportunities offered by mystery. And the mystery is the creation of a world, or a piece of a world, that gives you a chance to talk about what torments you and to compose poetry by finding images, comprehensive and glistening with jewels like a huge jellyfish that you’ve caught in the sea and roll in your hand, fearing its sting and enjoying the wondrous sight of its play of colours. Squint, and that play of colours will endlessly increase and multiply.